This post was published 6 years, 10 months ago. Due to the rapidly evolving world of technology, some material it contains may no longer be applicable.

Yesterday I was fortunate enough to pick up a 32GB Nexus 9 and I thought I would share my initial impressions of the device with you before I write my full review. Google and HTC have a lot riding on this tablet as its size, and indeed build, make it a direct competitor for the iPad Air. So how does it perform? Let’s find out.

First we’ll just remind you of the most important specs for this device:

Now that we’ve covered what’s inside, let’s get talking about the actual experience with the device.

Unboxing the Nexus 9 was a much nicer experience than opening my original Nexus 7. The box is much sturdier and easier to open. There’s a large nine etched into the top of the box, so there will be no confusion as to which device you’ve bought. Unless it’s upside down and then it looks just like the box of a Nexus 6…(but larger).

Once you open the box you will reveal the tablet facing up to greet you. Underneath that you have the charging cable, start-up guide, warranty information and stickers to attach to the back of the device in case you need to send it away for a repair of some kind. Hopefully I won’t be needing those. 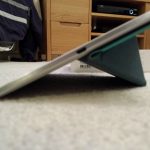 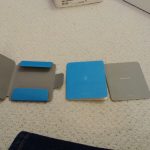 The first thing I noticed when I picked this device up was the quality. This is the most expensive Nexus tablet so far, but you can tell why. The band around the sides of the device are metal and the soft touch plastic on the back is very pleasant to handle. Other reviewers have been reporting that the black variant picks up fingerprints quickly, however I can report that the white model I have does not. After a whole day with it I have yet to notice any marks on the back at all.

The power and volume keys can be found on the right hand side of the device and they feel solid. I suspect that because I have only just picked up the device that I have the new fixed buttons rather than the first few which were sold about which many people had complaints.

The volume buttons can be a little hard to press at times, but that is most likely down to me. It always takes a little while to become accustomed to the layout and feel of a new device.

As soon as the tablet finished its boot and I’d signed into my WiFi, it immediately downloaded a system update which bumped me up to 5.0.1. Nothing prepares you for what happens after signing in. The screen is absolutely beautiful, with the colours popping and the icons almost floating off of the screen. I do a lot of reading on my devices and the text is clear with absolutely no jagged edges. The screen is bright and the viewing angles are fabulous.

As I went about downloading my apps I decided to listen to some music. HTC have brought their dual front facing “BoomSound” speakers to the Nexus 9 and my word, they are wonderful! They’re not just loud, the quality is top-notch as well. Even on maximum volume they don’t distort or sound tinny.

I don’t really use a tablet for taking pictures, however all the images in this article, apart from the ones that actually have the tablet in them, were taken with the rear snapper on the device so you can take a look and judge for yourself. You should bear in mind thought that all the pictures were taken indoors in slightly less than ideal lighting situations. Blame English cloudiness!

Anyway, I’d say The camera is not going to blow you away but it’s not too bad either. One thing I have noticed is that the low-light performance is surprisingly good.

I can’t really comment on anything else at this time, however you can expect a more detailed review in the coming weeks as I become more familiar with it and can experience all it has to offer.

If you have any questions about the Nexus 9 or would like anything specific to be covered in the full review, please let me know and I’ll do what I can to answer them.

How To Get Translucent Decorations On Your Nexus 10

Galaxy Note 2 To Get Android Lollipop

Play Books Gets The Update It Sorely Needed